Everything was very quiet.  The tourists, also known as dinner, had been disposed of.  We had our fill for the rest of the week.  Walking by the outer walls of the castle, I looked back up at the castle.  My jaw had dropped when I swear I saw Bella Swan inside our castle!  I rushed back inside to where I saw her standing.  She wore a white gown and had the same hair as Bella Swan.  The same alabaster skin.  The figure turned towards me, smiled, and disappeared into thin air.  Now, in my past, I've known ghosts really do exist.  Why wouldn't they haunt the castle?  The castle happens to be one of the final places our victims see.  Why wouldn't they want to haunt our castle and try to get their revenge on us?  But I had sworn she looked identical to Bella Swan! 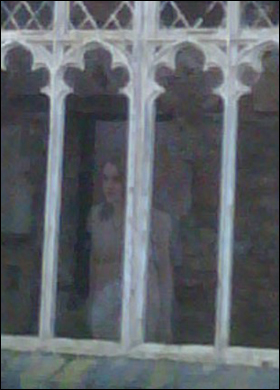 Just to make sure, I asked a connection in the United States to check up on the Olympic Coven.  Sure enough, they had reported back with a positive.  Bella was still, indeed, alive.  Well, alive in the sense that I am.

Needless to say, the Volturi Castle is very much haunted by the souls we have taken as our meals.  But, for that moment when I saw that ghost, I was really hoping it was Bella Swan.  Her and her shielding ability...One day, I hope to catch her off guard and be able to strike.  She gets under my skin moreso than Renata being Aro's first hand woman besides Sulpicia.  It bothers me when Aro asks me to try and recruit Bella, Edward, and Alice.  I don't like any of those three, let alone one day thinking they may cave and become one of us!  I'm not a religious person, but that is something I will pray never happens!  No Cullen recruits in the Volturi!  Because if there ever was, I would be sure to strike Bella and make that "wishful thinking" come true.  Oh to have the apparition of Bella Swan wandering the castle for eternity.  The idea brings a smile to my face!