I can still remember the first time at school where we had to study art.  Most of the guys were making fun of the classical pieces that our teacher was showing us and talking about them. Some of the kids were annoyed because we were having to study euopean art. I even remember one of the older kids asking why we weren't taking this time to learn more about our own tribal arts.

Our teacher simply stated that to truly understand art, you needed to study as many forms as you could. That we could discover more about our own art by looking at the art of others. She never took offense to any of the questions any one asked. She was proud of her students for trying to think for them selves.

We spent most of that afternoon examining art. Near the end of the day she asked each of us to write down which one we appreciated the most. 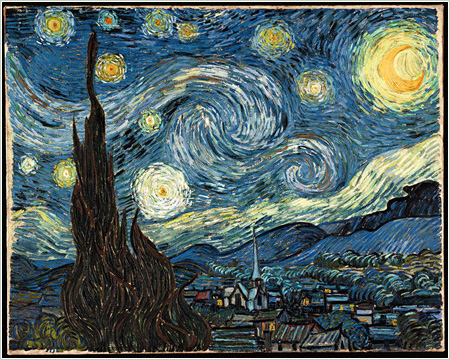 For some reason stary night stood out. It was like a photo that someone had blured. It made me wonder what the artist who painted it was seeing when he painted it. Did he have vision problems? Did his world always look like
that? It made my thoughts wander that night. why did I like this painting. Was it because it was different from the others we had looked at.

Being rather young still at the time. I think about 10. I started to wonder. What would it be like if that painting were a door to another world. Would it still look like that on the other side. What would I look like. would I blur? Would I become like those stars in the sky? And why was it that it was just the sky that became a blur. The houses looked rather normal?

Maybe I thought, this artist was using his imagination too. Maybe everything was blured because the city was under water. Maybe the sky looked all blury from the water that was covering the magical dome that kept the city safe.
How fun I thought it would be at the time to lay on there and look up at that watery sky. To lay and watch the water swirl and mix the starts. I'm pretty sure that's what I feel asleep thinking about that night as I dreamed about
that imaginary world.