Recent events including Felix's return had me reading through old journals.  Old missions.  Things Felix and I had done together.  Mission with Jane, Alex, Felix and myself. One mission as of late had stood out. The one where Aro sent us to check out rumors of a new born army.  It was normal to send all four of us out together.  Aro still had many strong guards in Voltera with him and the other masters.
Jane was in charge.  Something that didn't usually sit well with either Felix or I. We got the usual lecture from her about behaving as we boarded the jet to head to America. It only took a simple glance for Felix and I to communicate how we felt about this.  We had fed before we boarded the jet.  So at least that would not bother us on the long flight. We had no idea as we boarded the jet how long we would be gone.  I had a bad feeling there would be a lack of enjoyment or fun on this trip.  Jane seemed to be in a very serious mood.  I had no interest in being subjected to her abilities.  Granted the masters forbade us from using our abilities on each other, with very few exceptions.
The flight was long, and rather dull. Jane insisting we needed to stay focused on the task at hand.  After we landed we waited for night to fall.  The city was still a bustle with noise and commotion.  We knew it wouldn't take much to find those we were seeking tonight. They had been leaving a trail of destruction everywhere they went.  Feeding carelessly.  Breaking so many of our rules.
And find them we did. 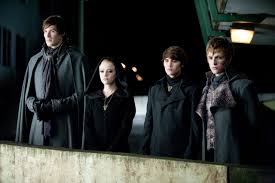 We stood and watched them a while.  They seemed unaware of our presence.  Listening, watching, learning.  Now that I had seen them, tracking them down again at any time would never be an issue.  Finding any who were not here tonight but were part of this, well I could track them down now too.  Smirking a bit as I thought about hunting them down.