Today I visited Camber Sands.  It’s a wonderful long sandy beach based in the little village of Camber, East Sussex, UK. It’s the only the beach in the county of East Sussex with sand dunes!

Camber Sands holds many special memories for me as this was the beach I used to spend many summers on when I was a child. I haven’t visited it for years so to go back today was really nice, even if it was very cold, wet and windy! Nothing has changed on the beach as such, though now there are a few more restaurants and houses along the way to the beach.  It’s very idyllic in the summer and pretty picturesque in the winter.

Today the tide was quite high which was good as it meant I could look at the sea fairly closely. The sea goes out a long way and I remember as a child, it felt like ages to get down to the water to swim!

It may seem strange to some to visit the beach in winter but the British are mad and will do this kind of thing! We’re quite proud of that. I was surprised to see there were quite a few people walking on the beach today given the weather conditions but it was quite heartening to see.  There were horse riders on the beach too so all in all it made for a nice atmosphere.

After I visited Camber Sands, I went to the little port of Rye which is about five minutes away from the beach. Rye is beautiful with lots of cobbled streets and historical buildings. Unfortunately I didn’t get any pictures there as I spent quite a fair bit of time in the pub (not a surprise to anyone that knows me haha) and then did some shopping in the craft shops.  It is very pretty though and well worth seeing if you are ever in the area. 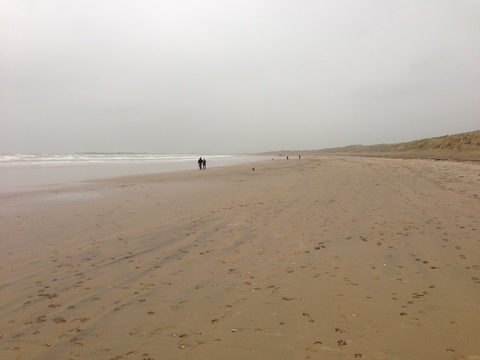