While visiting California I came across an advertisement about a Renaissance Faire.

Not truly satisfied as to what people term the Renaissance Era. I decided to do some research on this subject. I found a few websites about upcoming faires and found labeled society for creative anachronism (SCA). I was truly unsure of the latter website but reviewed it just the same.

To be completely clear, The English Renaissance was a cultural and artistic movement in England dating from the 15th and early 16th to the early 17th century. Which the 15th century starts at 1401 AD and the early 17th century would be early to mid 1600's. The beginning of the English Renaissance for historic convenience as starting in 1485 AD with the end of the War of the Roses and the inauguration of the Tudor Dynasty. Which started with the reign of King Henry VII and ended with Queen Elizabeth I. The height of the English Renaissance was during Queen Elizabeth I's reign. This seems to be the time period in which several Faires are set.

I decide that it may be of interest to see what the people of today believe happened in this time period.

Gathering supplies from the local fabric store, sending up a silent prayer of thanks to my mother for teaching me to sew. I set to work on my “costume”. Yes, nodding at my finished product. That looks appropriate and from the advertisement I will have a most unique costume indeed. By the way... I did sew my costume unlike many I learned later that used machines.

Putting on my costume and head out to the Faire grounds.

I park my car and hop onto the bus that takes us across the street to the park. I wait my turn in line to purchase my ticket to enter and I am greeted by people waiting to slather me up with sunscreen. I decline their offer. 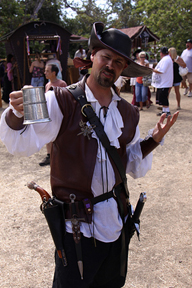 I step further inside and look and see that a small village has sprouted up in this park. Yes, the structures are not of the period but knowing full well that must have to take them down I let it pass. I spy the lacemaker and her handiwork. I compliment her work. I continue down the path and see many taverns with people around them.

Turning a corner I see a man chained to a tree. His eyes red as flame he looks to be a daemon but couldn't be. I look again and inhale, no he is human for sure and possibly quite delicious.

I hear the sound of cawing birds and notice a stage. I stop hoping to catch a glimpse of their act. Laugh at the jokes from the man. I spy a little girl staring in awe. I ask the girl if she would do me a favor and give this to the man on stage. I hand her a few bills and she runs toward the stage and hands it to the man. I see him thank her and slip away.

The next turn I spy a cluster of men eying shiny objects. I close in and see that they are beautifully crafted swords. I learn that the man in the booth's name is Brady. I ask him to see a few of his more expensive wares. After which I purchased a couple of pointy bits.

Passing several ale stands and food stands. I see the queen's court. There I spy the lovely Bessie. Not exactly the spitting image of her majesty that I remember but ok. I do cringe at her words and voice. Not at all like Bessie. 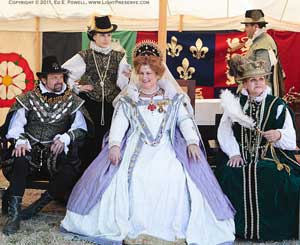