One year and looking ahead to many more.

Can it really be a year, one year since I stood in front of my family and friends and promised till death do us part to the love of my life Jacob Black.

Yes it’s really been a year of being Mrs Black and I would love to say it was just a year of awesomeness, but let’s be honest here. It’s marriage and yes it can be hard.

I mean you have two people learning to share one space like all the time and even though since the first time I entered the world we have been together it was still an adjustment.  But honestly I will not trade it for anything.

They say that the first year is the hardest and I think we aced it. So you probably would love to know how we celebrated it. Of course it was the most romantic week of my life so far and believe me I have had a few.

It all started with one of the Embry coming to fetch me at the hospital the evening before our anniversary with instructions that he has to take me to Jake immediately, at first my heart sank into my shoes as I thought something must have happened but looking at the smirk on embry’s face quickly made me realise that Jake was okay and I am in for some or other surprise.

To be honest I did not even think it’s related to our anniversary as we both have been so busy at the hospital and Jake at his garage that we have not really talked about making any plans.

The next thing I know we are stopping on this big open field and there is this helicopter waiting for me. I recognised the signs on the helicopter as one of Jakes clients and smiled as I expected to see Jake waiting for me inside but no it was just me and the pilot and a letter telling me of how much he loves me and what the past year has meant to him. My anniversary surprise could have ended here and I would have been happy but little did I know.

Next stop was the airport in Seattle and there I was greeted by my amazing husband with two plane tickets for the Maldives. I was very excited as I have always wanted to go there. We boarded the plane and had an amazing time on the flight watching movies and talking and just spending time with one another without having to rush off to work or patrol.

When we arrived at the airport someone from the Hotel waited for us and took us straight to the Hotel.  When we got to the Hotel and booked in we were taken to a boat who took us to our hotel room. It was on stilts in the water and just how I imagined it would look.

We could talk and laugh and just focus on us and nothing else. We might even have had a conversation or two about what is next for us. Who knows maybe we can expand the family circle but more about this later. 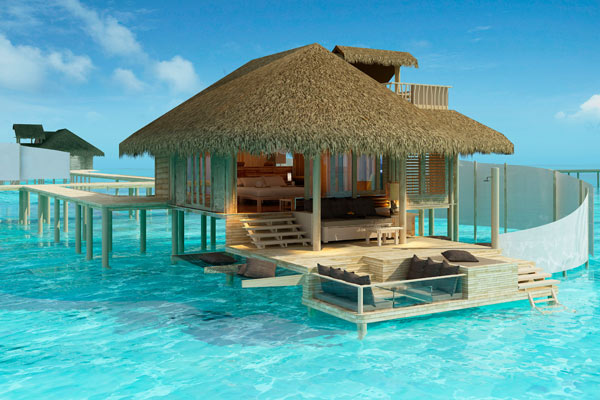